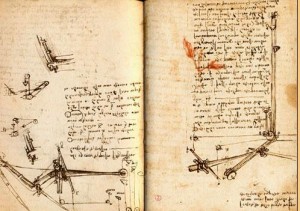 Science in the art of the italian Renaissance II: Leonardo Da Vinci’s representation of animals in his works

Leonardo Da Vinci, the great artist and scientist of the Renaissance, showed a keen interest in nature in his works. His interest not only manifested itself in his drawings and paintings, but also in his scientific inquiries. This interest is evident in the many observations and writings Leonardo made on such varied subjects as botany, zoology, human anatomy, comparative anatomy, physiology, and geology. His interest in animals is evinced by the exact realism and life given to animals in his works of art. This exacting nature is also obvious in one of Leonardo’s most complete treatises. This treatise, On the Flight of Birds, is considered the first “systematic analysis of the principles of flight”. Leonardo’s interest in birds, among other animals, was likely formed during his youth. His fondness of animals was so great that he was rumored to buy caged birds and free them. Leonardo made many studies of animals, with cats, dogs, and horses as frequent subjects.