The design for a Royal Mint coin commemorating the union of Prince William and Kate Middleton has received a lukewarm reception, because the couple are barely recognisable.
The image is based on a picture taken at a polo match, but Ms Middleton, in particular, appears older and to have gained weight.
The £5 coin can be ordered for between £9.99 and £1,550, depending on whether 22-carat gold or nickel is used. 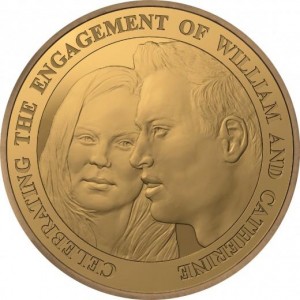 The £5 coin may excite collectors of Royal memorabilia but the reproduction of Miss Middleton’s face is perhaps unlikely to be praised by critics for faithfully reflecting her beauty.
The engraving was based on a photograph taken of the couple at a polo match a few years ago, and the design was approved by Prince William and his mother, the Queen.
The coin is available in solid gold for £1,550; as sterling silver plated in gold for £85; and in silver for £55.50 but stocks have yet to be delivered for sale.
A spokesman for Clarence House refused to comment on the accuracy of the reproduction of the couple’s features.
Last week, the official crockery released to mark the occasion was described as “lazy and insipid” by one critic. 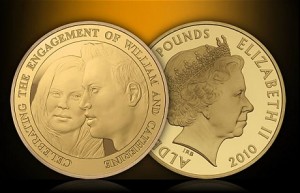