In the film “The Alamo” (John Lee Hancock, 2004) there is a numismatic error. Film is about the battle of Alamo, which took place in 1836. In an early scene a Texas general (then engaged in war against Mexico), while out of a tavern, flip a coin on the table that is in the foreground. This coin, which is visible from one side only, bears the outline of the mexican general-president Antonio Lopez de Santa Anna and the date 1834. 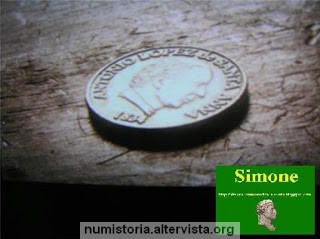 The error is that this money is non-existent, because coins with profile of general Santa Anna was never been minted. Probably is not a mistake: it could be a mistake to volunteer, that is, the money may have been created by the production of the film to introduce the duality between the general and that its mexican counterpart (general Santa Anna).