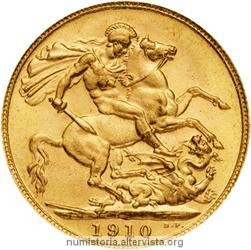 The Great Recoinage of 1816 was wanted by the British Government to re-stabilise British currency following economic difficulties precipitated by the French Revolutionary Wars and the Napoleonic Wars.

22 June 1816, during the reign of king George III, the british Parliament voted for abandonment of silver as basis of monetary system in favour of gold standard. In 1817 gold guinea (it was worth 21 shillings) was replaced by a new coin: the sovereign, that worth 20 shillings.

In 1868 Statistical Society of London estimated that, for each year of circulation, gold sovereign lost 0,00276 grams: so each coins could circulated for up to 18 years before losing legal weight. Other sources indicated, conservatively, a maximum period of 15 years.

This means that coins worn or damaged were withdrawn and their gold was used to produce new sovereigns. So, even if total mintage of sovereigns from 1816 to date exceed a billion, this doesn’t mean that have been used 8.000 tonnes of gold.

Even dies used to produce sovereigns wore out and, in the nineteenth century, when didn’t allow a high-quality production, this worn dies were used to produce copper farthings (coins worth 1/4 penny).

Stability of new monetary system was a key to British commercial success in the nineteenth century. But in 1919, after World War I, gold standard was abandoned, only to be re-introduced in 1926 and to reach the definitive abandonment of currency convertibility in gold in 21 September 1931. The last minting of sovereigns was in 1932 by South African Mint in Pretoria.

Great Britain restarts to mint sovereigns from 1957; coins circulated among collectors and investors only. Last uncirculated sovereign was minted in 1982: between 1983 and 1999 this coins were minted in proof version only; since 2000 were minted BU (brilliant uncirculated) sovereigns, in addition to proof coins.