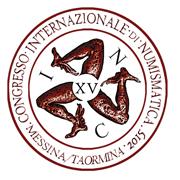 The XV International Numismatic Congress will be held in Taormina from 21th to 25th September 2015, half a century after the last Congress held in Italy (Rome 1961).
The organizers of the Congress are the chairs of Iconography and History of the Ancient Coin (prof. Maria Caltabiano Caccamo) and of Medieval Numismatics (prof. Eligio Daniele Castrizio) of the University of Messina.

The scientific Committee is constituted by prof. Ermanno Arslan, member of the Accademia dei Lincei, prof. Lucia Travaini from Milan State University, prof. Sebastiano Tusa, Superintendent of BBCCAA for the Region of Sicily/Province of Trapani, dr. Benedetto Carroccio and dr. Mariangela Puglisi.
The Numismatic School of Messina University, thanks to the vivacious collaboration of a large group of newly graduated students, has published important scientific contributions: monographs, Conference Proceedings and a number of articles which have appeared in national and international Journals.

The International Congress, which takes place every six years, represents the world renowned event in the field of Numismatics. It is attended by a great number of people (600/1000 ca.) and attracts scholars, curators of coin Collections and of Museums, Antiquaria in Firms, and Auction Dealers from the five Continents.
The Congress forms a part of the politics for the promotion, conservation, valorization and fruition of the material and immaterial patrimony belonging to Sicily in particular and to Italy in general.
In order to valorize this Italian numismatic patrimony, several initiatives are being promoted, in the years preceding the XV Congress, to bring to the knowledge of the public the extraordinary potentiality of the coin as historical document informing about local identities and cultural heritages.

The International Numismatic Congress is organized under the auspices of International Numismatic Council (Commission until 2009), founded in 1934 “to facilitate cooperation between scholars and between institutions in the field of numismatics and related disciplines”.
The Council consists of more than 150 members belonging to 36 different Nationalities, representing Museums, Universities, Numismatic Societies and Mints. Its activities are coordinated by a Committee of nine members, coming from different countries, elected among the representatives of its associates, and is at the moment directed by prof. Carmen Arnold Biucchi from Harvard University. The choice of the venue of the International Congress is decided by the Assembly of the members who meet for this purpose in the day established during the previous Congress.
In the past the venues have been, in chronological order, the following cities: Bruxelles, London, Paris, Roma, Bern, New York – Washington, London, Bruxelles, Berlin, Madrid, Glasgow.