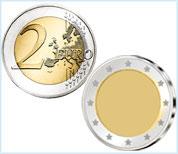 January 2012 marks 10 years since the introduction of euro banknotes and coins.

To celebrate this, all euro area Member States will issue a commemorative circulation coin in 2012, bearing a common design on the national side.

Over 330 million people in 17 EU countries now use the euro. A common currency makes many things easier, such as comparing prices between countries, travelling and trade (no more charges for changing money or exchange rate fluctuations). It also reinforces the need for sound economic and financial policies.

If you are a citizen of an EU Member State whose currency is the euro and you are at least 12 years old by the end of 2011, you can submit your design proposal via this website. The design should illustrate the single currency itself, and its benefits.

Designs must be submitted in an electronic template that you can download from the website. You can submit one design only during the competition, which will run for about 3 weeks, starting in late April.

Apart from seeing his/her design on millions of circulating euro coins, the winner will be awarded a high-value collector’s set of euro coins.

People who are citizens of an EU Member State whose currency is the euro or are living in the euro area will vote for the winner from a selection of entries chosen by a professional jury.

The web-vote will take place over about three weeks in June, with the winning design announced by 30 June.

The commemorative coin bearing the winning design will be issued by all 17 euro-area countries early in 2012.